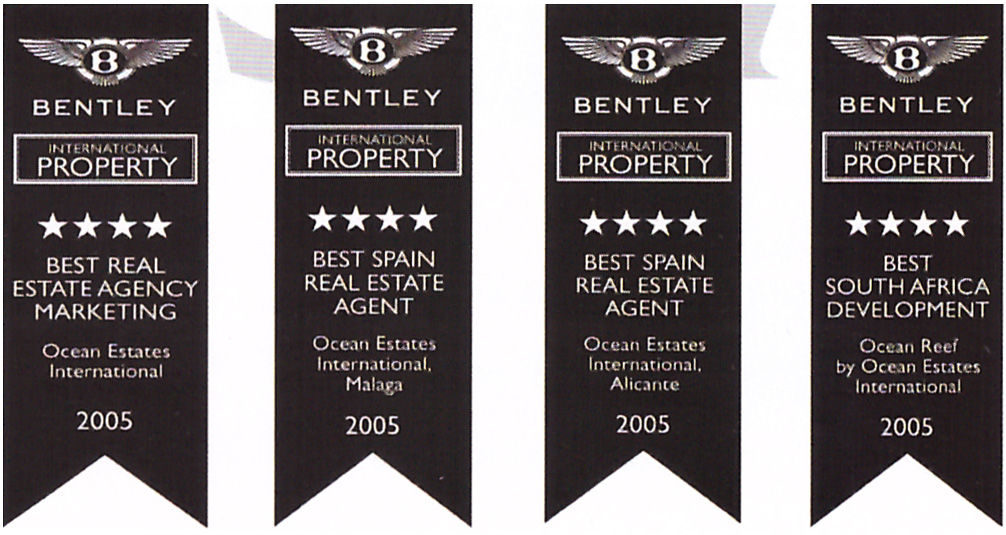 Each year these awards are fiercely competed for and Ocean Estates strives to maintain its level of success. With this in mind, it is even more commendable that Ocean Estates has accomplished the remarkable feat of winning Best Spanish Estate Agent for the eighth consecutive year.

The awards were initially held in the member’s dining room in the ‘House Of Commons’ parliament building and this prestigious event soon outgrew the capacity of the famous member’s dining room. Founder, President and Chairman of Ocean Estates, Alasdair Macdonald commented, “I am thrilled that Ocean Estates has won so many awards at the 2005 Bentley International Property Awards. It is testament to our continued hard work and success as an Estate Agency in Spain and South Africa, with increasing competition in the market year on year”. Over the last eleven years the International Property Awards have been presented to those who demonstrate excellence in the property industry. The board of judges are independent experts and the awards help validate the professionalism and high standards that Ocean Estates continuously strives to maintain.

These awards, personally judged by a professional architect and surveyor, are sponsored by top companies: The Daily Telegraph and British Airways.

When only the best will do

An unparalleled 30 year plus history of recruitment and training thousands of telemarketing personnel, sales executives, managers and directors, from small starter companies to international corporations. Polar can tailor a specific programme to suit your requirements, which can be monitored and expanded on an ongoing basis, if required.

Existing personnel and teams can be assessed and coached to a finite level.

Exceptional results required to compete in this most competitive of markets can be achieved.